The most important clinical process in patients with cancers is the accurate estimation of prognosis and survival duration. Patients who volunteer their genomic data run the risk of privacy invasion. While established encryption techniques, such as Advanced Encryption Standard (AES) can secure Personal Health Information (PHI) in Acquisition and Storage, they can only assure secure storage. Assuring data privacy in Computation is much more challenging.

Genomic profiles among cancer survivors who received similar treatment may provide clues about the key biological processes involved in the cells and find the right treatment. More specifically, such profiling may help personalize the treatment based on the patients’ gene expression.
View the live site 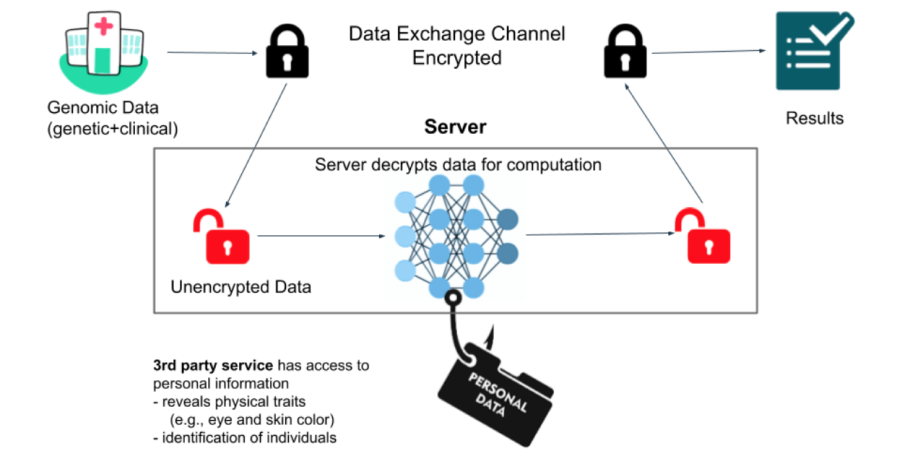 Gene expression measures the level of gene activity in tissue and gives information about its complex activities. Comparing the genes expressed in normal and diseased tissue can bring better insights into the cancer prognosis and outcomes. Using machine learning techniques on genetic data can giving the correct estimation of survival time and prevent unnecessary surgical and treatment procedures. The method can take place between multiple parties that can include the data owner(s), the model owner(s), and the cloud server(s). Computation can be performed over a client's encrypted data. The (encrypted) result is returned to the client, who then decrypts to view his/her result privately. Thus, homomorphic encryption can protect the sensitive details of the actual data, but still, be analyzed and processed.
Read more
View the full case study 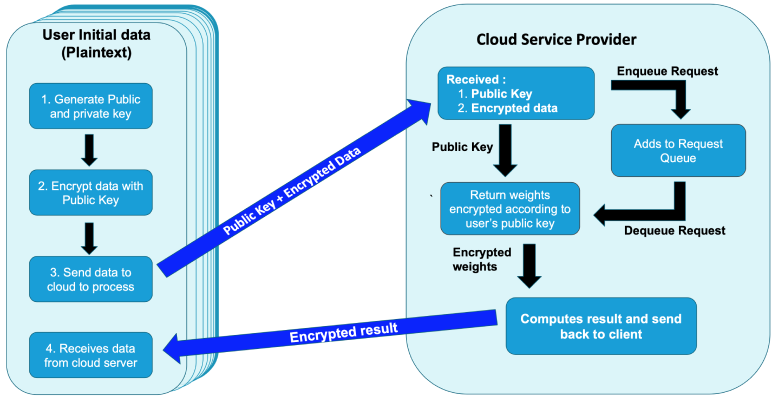 The above solutions for survival prediction and analysis claim to be very effective approaches but cannot be applicable in the real world due to the privacy concerns associated with genetic data. Our solution uses a similar approach but performs computations on homomorphically encrypted data, eliminating out the privacy concerns associated with it.

2) This project [3] demonstrates the use of Homomorphic Encryption for outsourcing neural-network predictions in the case of Acute Lymphoid Leukemia (ALL). Their work proposes a Neural Network model which will be able to predict ALL with approximate 80% accuracy and by the use of FHE also tackles the privacy concerns.

Most of the prior arts have used FHE with conventional prediction algorithms like deep learning methods but in survival prediction, more prominent approaches are Survival analysis methods, which are explicitly designed to deal with data about terminal events where some of the observations can experience the event and others may not i.e censored observations hence we have incorporated Kaplan Meier curves for survival prediction with other algorithms for better results.

3) This study [4] takes a large set of genomic markers (SNPs) and determines which of them are associated with a given trait. They used the SIMD capabilities of the CKKS HE scheme, to compute a large number of models, demonstrating the use of the CKKS homomorphic encryption scheme to train logistic regression models.

Another paper [5] evaluates the feasibility of training neural networks on encrypted data. Their proposed system uses the open-source FHE toolkit HElib to implement a Stochastic Gradient Descent (SGD)-based training of a neural network. The paper adopted the approach of the lookup table by pre-computing loss function and activation function and performing homomorphic table lookup.

The solution in [6] can handle thousands of records and hundreds of fields which takes a few hours to run. To achieve this performance they had to be extremely frugal with expensive bootstrapping and data-movement operation, they also aim to serve as a guide for what is or is not currently feasible to do with fully-homomorphic encryption talking about how expensive FHE can be and use of  (Somewhat homomorphic encryption) SWHE scheme in some scenarios. 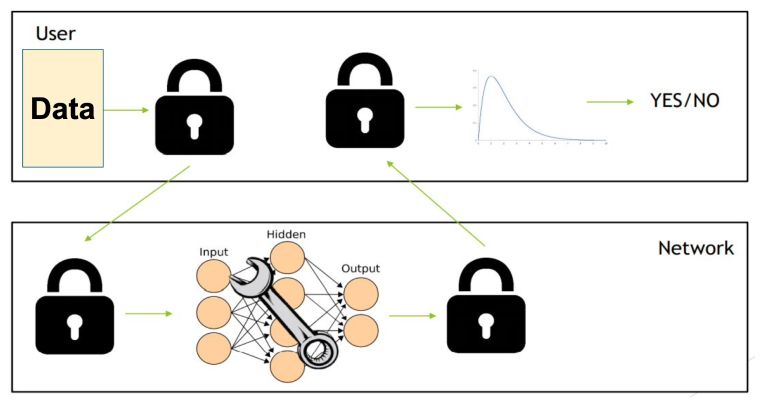 We propose a cryptographic solution to the above-mentioned problem: maintain patient privacy, by encrypting all genomic data in the database and  perform a meaningful computation on the homomorphically encrypted data to predict the survivability of the patients who underwent specific therapy. 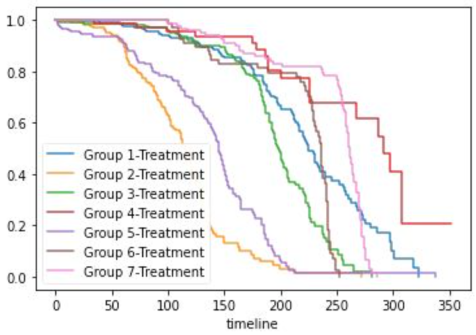 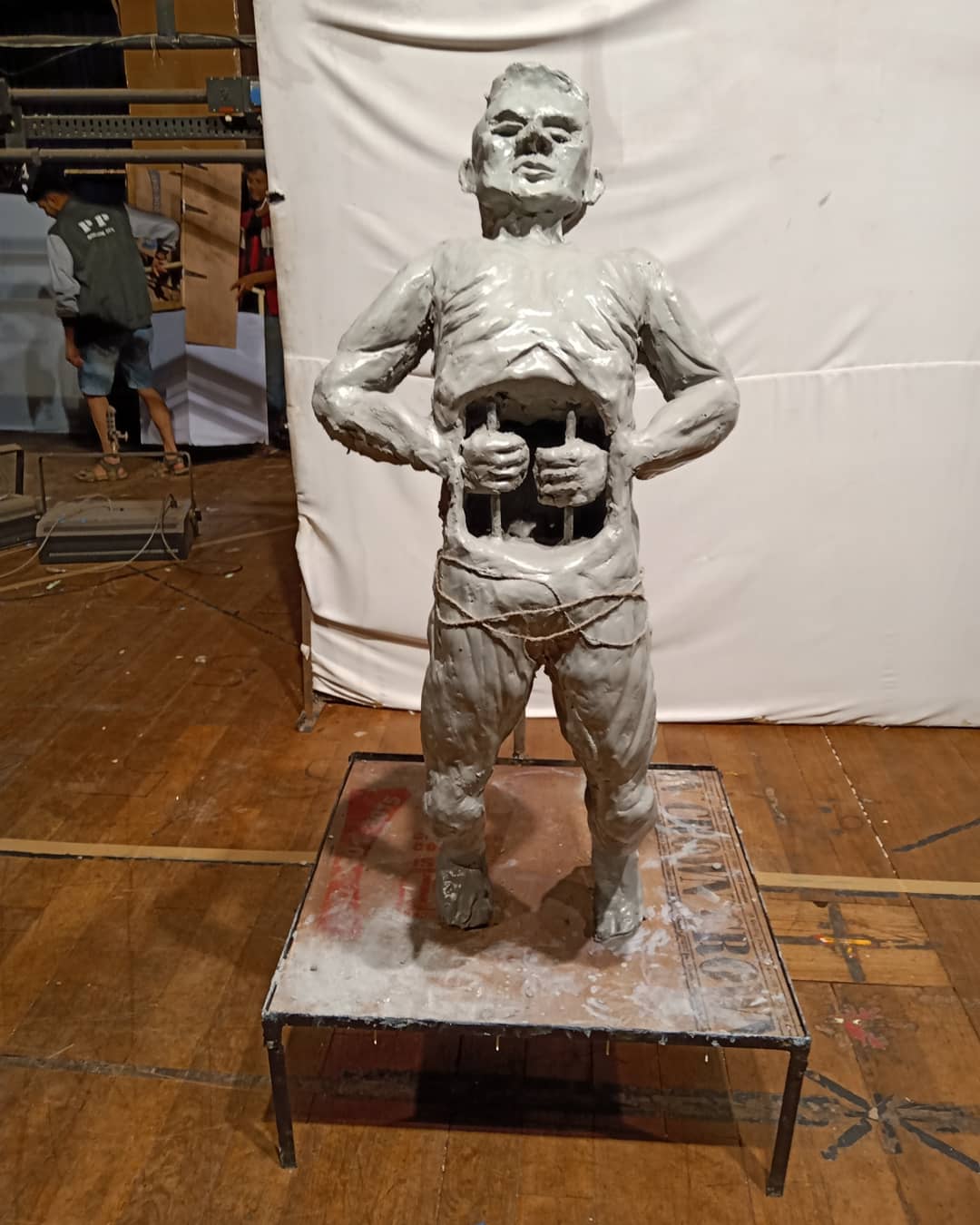